‘Whats It All About? – The Cilla Black Story’

In Late 2018 Cilla Black returned to the UK album charts with her recording showcasing her best-loved songs with the Royal Liverpool Philharmonic Orchestra, so an opportune time to reflect her unique musical story. As one the UK’s best loved & popular television stars, it’s easy to forget, in the early 60’s Cilla Black was the second biggest-selling music star to emerge from Liverpool – after The Beatles. Undoubtedly she holds a unique position in the history of popular music as a Brian Epstein discovery. As programme presenter Claire Sweeney reveals thanks to the production skills of George Martin she became a formidable singer, one of the UK’s favourite pop performers during the ’60s and ‘70s with a string of engaging hit records. The programme explores her best known recordings with comments from those who were there plus friends and family, coming right up to date with her latest album with the Royal Liverpool Philharmonic Orchestra.

Now Thats What I Call A Christmas Hit –

Now That’s What I Call A Christmas Hit” explores the festive song from Bing To Band Aid and Beyond. This packed show features dozens of great hits with comments from many of the people who made them happen, with comments from Midge Ure, Roy Wood, the guys from Slade and The Pogues plus many others. So, why do we love festive hits so much? What get us Rocking around the Christmas tree? Is there a magic formula and why do the perennial favourites keep coming back year after year? Mark Goodier throws some new light on your favourites, revealing where these songs were created and the thinking that went into their recording. So for the very best Christmas music and all the festive hits you love,  “Now That’s What I Call A Christmas Hit” explains all.

This one hour documentary presented by Mark Goodier explored the music and career of Roy Orbison with comments from U2’s Bono, Bruce Springsteen and friends and family. In the programme we heard how Roy has successfully managed to maintain a 30 career. Although he shared the same rockabilly roots as the likes of Johnny Cash and Elvis Presley, Roy went on to champion a totally different type of country/pop-based rock & roll. What he lacked in magnetism and good looks was more than compensated in his quavering operatic voice and melodramatic songs. In the process, he established rock & roll archetypes of the underdog and the hopeless romantic, appreciated and embraced by so many including, as this programme describes, Bruce Springsteen and Bono. Time was devoted to his new album “Unchained Melodies” a collection of his best known songs beautifully showcased with the Royal Philharmonic Orchestra and highlighting Roy’s greatest legacy and his finest asset – his voice.

‘Screamadelica’ by Primal Scream. Front man Bobby Gillespie talked us through this seminal album of 90’s revealing how they captured the mood of the times in the recording and scored a huge hit album in the process. 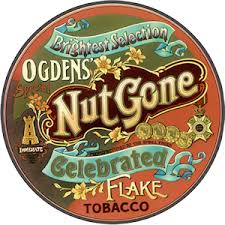 ‘Nut Gone Flake’ – The Small Faces. Drummer Kenney Jones revisited this classic album of the 60’s taking us through how the songs came together and how professor of nonsense Stanley Unwin became the record’s narrator.

‘Everything Must Go’ – The Manic Street Preachers.  Manics frontman James Dean Bradfield recalled how the band coped with the disappearance of guiding light Richie Edwards and the subsequent recording of their 1995  album.

‘A Night At the Opera’ by Queen. Utilising special archive material of all four group members the programme explored this classic album through the recollections of Roger, Brian, John and Freddie 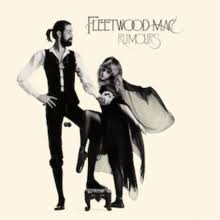 The ultimate soap opera this edition revealed how the band were grappling with breakups and marriage breakdowns as they recorded their second album together and went on to produce one of the best selling records of all time. 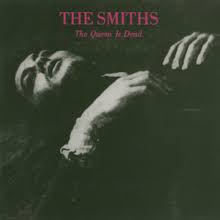 ‘The Queen is Dead’ – The Smiths. With inside knowledge of producer Stephen Street, Morrissey biographer Len Brown and music journalist Andrew Collins the programme revealed the Smiths finest album and celebrated one of the best of British bands!

“Dirty Dancing” is a film classic, which has sold over 35 million album soundtracks and 6 million copies on DVD, and after 3 decades, continues to enchant generations of fans….old and new. Sugar Productions was involved in reflecting this timeless dance movie that explores the summer of 1963 and released in August ’87.

As we hear this low budget independent movie written by Eleanor Bergstein about her own childhood family holidays in the Catskills mountains, follows the adventures of Baby & Johnny as they fall in love. The documentary written and produced by John Sugar featured comments from Patrick Swayze, leading lady Jennifer Grey and leading American choreographer Kenny Ortega. As we heard the ‘Dirty Dancing’ phenomenon continues as each new generation embraces this classic love story. The film remains fresh, relevant and as engaging as when we first saw it back in 1987. This record-breaking film still has many fans, quoting the corny lines, singing the songs and sometimes even trying the dance moves. For many it’s the perfect date-movie and the ultimate girls-night-in treat and its appeal shows no sign of fading.

In this special programme, set to the soundtrack of Hall and Oates song writing craft, we heard about how they write their songs and how they see their remarkable music partnership after nearly fifty years together.

Presented by Mark Goodier the programme charted the duo’s first hit in 1974 through a remarkable sequence of their ’80s worldwide hits.These guys were big Daryl Hall and John Oates smooth, passionate take on Philly soul brought them enormous commercial success – including six American number ones singles. The one hour programme revealed that the 80’s was a career high in terms of commercial success, producing a stream of great songs and albums that still sound as good today as when they were first released, Daryl & John continue their passionate relationship with music and with their fans, with album releases and regular live shows today.

With unique comments from Daryl Hall and John Oates the programme gave a revealing insight into the duo’s longevity for Absolute Radio – Broadcast Sunday 12th November 2017.

Sugar Productions filmed and produced an interview with Laura Mvula exploring her recording of the Jacksons’ funk song “Dancing Machine” has been updated with producer Naughty Boy. Laura’s unique version of ‘Dancing Machine” is due for release in later in 2017.

Laura Mvula is a British soul singer-songwriter from Birmingham, many may recall her debut album, ‘Sing to the Moon’, released in 2013 and a Top 10 album in the UK Charts.

She has collaborated with many artists including Nile Rodgers, Wretch 32 and now comes her recording with Naughty Boy. Recently Laura was working with The London Symphony Orchestra at the Barbican Arts Centre and producer John Sugar spoke to Laura Mvula , filming and recording at Metropolis Studio in London. The mood in the studio was upbeat and after we heard the finished recording of “Dancing Machine” we totally understood why. 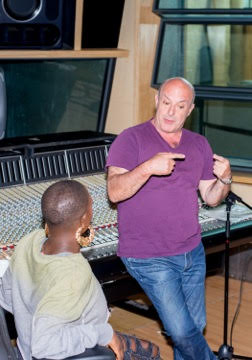 Sugar Productions is delighted to be working with singer and Wet Wet Wet frontman Marti Pellow. His new album “Mysterious” is released March 2017 and Marti has produced the album himself working hard with an impressive group of fine session players in LA, Dublin and London. A special deluxe release of the album features an in depth interview exploring the music and Marti’s impressive 30 year career.

Producer John Sugar spoke with Marti, discussing the album track by track and his musical journey. Sugar Productions not only recorded the interview but filmed the proceedings at Rak Studios in London for Arctic Poppy Music supporting the album release providing on line content for fans.

“John, you are such a musical man the way you put it together is wonderful,  its such a pleasure to be interviewed by someone who knows many aspects of music, I know the fans will love it as I do” Marti Pellow

Naughty Boy is one of the UK’s leading music producers and is renowned for his production work with Emile Sande, Sam Smith and Mary J Blige. He is currently producing an album celebrating the Motown label’s finest songs reinventing them in a contemporary way and bringing the songs blinking into the light of the 21 st Century. 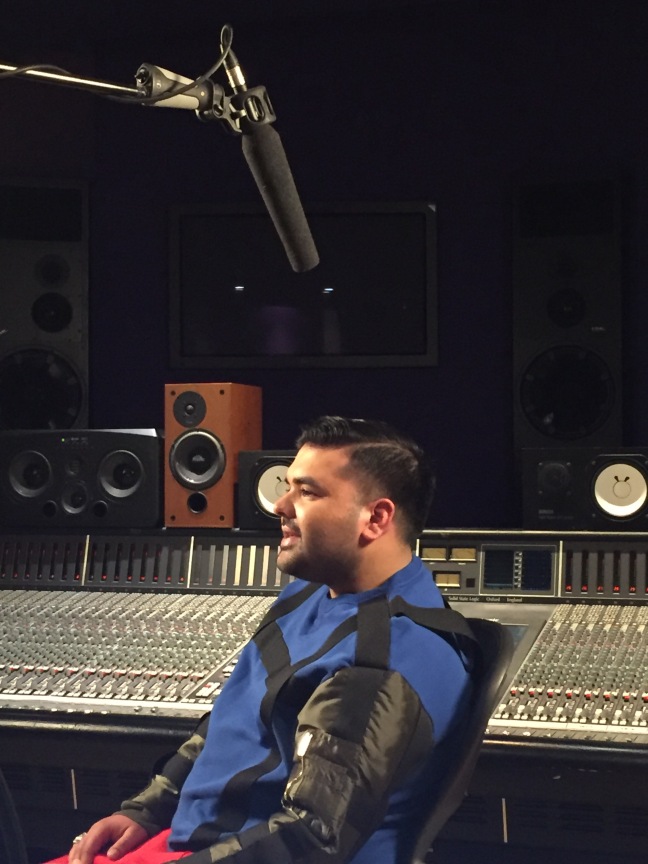 Sugar Productions was asked to film and produce an interview with Naughty Boy talking about his exciting new music project andreveal the exciting names performing on the record slated for release later in 2017.

The Motown Album as yet untitled is very much a work in progress and so far features Shezar, UK rappers Krept and Konan, Emile Sandi and Izzy Bizu. More names are lining up to take part in this rebooting of the Motown legacy. More information as we get it !

Sugar Productions Ltd is delighted to be producing an exciting new media event in collaboration with a talented team. ‘HI-YA’ is a celebrity based website which will allow people to exchange creative and entertaining messages from high profile personnel to each other. Aimed squarely at a young demographic ‘HI – YA’ will sit well alongside Instagram, Snapchat and Facebook as the must have accessory for a growing young media aware market, making worldwide messaging from a smart phone, laptop or tablet, fun and profitable.  Please see short animation below for more information about ‘HI – YA’

Sugar Productions Ltd loves great ideas and programmes for broadcast and new media. We’re a content company, but also in the people business and understand the needs of the modern broadcast environment on air and on line.

We are also able to arrange voice over sessions utilizing some of the finest studios in the UK. This means we can offer a complete recording service from our media centre in London. We've been helping broadcasters (most notably the BBC) select, record - voice artists and presenters for our programmes and films.

Director of the company John Sugar has learnt a thing or two in his lengthy career and now is happy to participate in voice over sessions and direct others in the studio. Sugar Productions Ltd uses the finest studios all equipped with Pro-Tools adhering to BBC standards and acoustic design. So you can be sure that your voice over recording, programme or film will be delivered to the highest standard and completely to your specification.